Leaving Hwy 49 at Jackson CA and turning East, I felt like fresh air had just been injected into my weary suburban heart. The Sierra surprise detour had been wonderful, and now onto my destination… crossing the Sierra Mountains via California State Hwy 88, the road started to climb… elevation 1217 feet above sea level.

20 miles later I was still climbing, I watched as every five minutes I passed another elevation change sign. Five thousand, Six….Seven….Eight…snow was visible now in the wooded terrain, piled up under shaded overhangs and deepest wood. The road was winding and snaking through the changing environment, two to four lanes of smooth blacktop with a magnificent tour of the evolving alpine world of the Sierra’s. Snow could be seen now capping the nearby peaks with glinting ice fields and thousands of frosted evergreen acres stretching out as far as my eye could see. 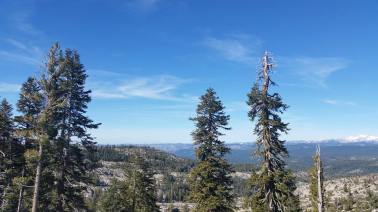 Carson Pass is the highest point on Hwy 88 and it topped out at 8,652. Not the highest I’ve ever crossed, but the elevation gain from Jackson CA was significant. Over seven thousand feet in less than an hour and the air was clear, cold and fresh. Just the way I liked it 🙂

I pulled off the shoulder of the road and snapped a few pictures. The scent of pine and cedar was seductive… what if I just grabbed my pack and started walking? Left the crazy – over stressed – psychobabble of the modern world behind and just went to be with God, nature and the silent solitude of the Sierra’s…. it was very tempting.

But alas… the cold was starting to creep into my un-gloved hands and my Patagonia mocs weren’t cut out for much rock hiking, I wouldn’t make it two hours before I would be frozen and frustrated. Better stick with the plan. Keep moving, forward. Responsibilities, obligations…. everyday life was calling me back from my reverie.

I climbed back into my rental SUV and kept driving East. Hwy 88 was a beauty. A main artery to Lake Tahoe for the locals, it was in excellent condition, obviously one of the key routes for travel during the winter (when the other two-lane, lesser used highways closed for the season) and not a snip of ice or snow was present to slip or slide on. Crossing the Sierra’s was not an up and done, but a long – 60 minute drive with a spectacular,  top of the world – feeling as I passed alpine lakes and cliff top summits, sprinkled with snow and sun. BEAUTIFUL !

The California Sierra’s are worth the effort. Driving my thousand mile loop WAS crazy, but it was crazy with a promise and man did that promise DELIVER !

Winding over the pass during mid-day and into early afternoon, I could see the golden glow warming the tips of the peaks as early winter sundown approached the sheer flanks of the mountains.

I quit gawking and started driving, needing to get south of Mammoth to make my flight out the next morning. I pushed south on Hwy 395 briefly crossing into Nevada and back as the road again surprised me with stunning beauty and wonderful fifty mile panoramic views. Topaz Lake, Mono Basin and then Mammoth.

Mammoth mountain has always been legendary among outdoor enthusiasts, but to see it personally in the winter was breath-taking ! Juxtaposed between the eastern Sierra mountains and the Death Valley basin desert… it’s divine. My journey south on Hwy 395 caught the last vestiges of a warm pink glow on the horizon; a gentle, winter, sunset.

The best for last…. for sure. Thanks GOD, I needed that!

If you’ve not seen a desert sunrise or sunset, you need to. Put it on the bucket list. As I climbed into my price-lined $80 hotel bed in Lone Pine, CA.., I was so grateful for the last 24 hours God had gifted me.

It was an escape.

My own private tour of the Sierra mountains. Each detail carefully prepared ahead of time, and all I had to do was just follow the clues…. (my heart’s longing led me to pull away) and the rest was taken care of.

How often did Jesus do exactly the same thing? Dozens of times that we know of in scripture. He frequently went alone to a mountain to pray…I believe to clear his head and listen, to be refreshed from the rigors of public ministry.

Take the risk… go on your own Sierra tour (or one closer to you) and unplug-reconnect and renew your heart. You won’t regret it…the mountains are calling, “Come Away”.

There was an error retrieving images from Instagram. An attempt will be remade in a few minutes.